Flick of the Week: “You're dead, son. Get yourself buried”.

This week’s flick of the week takes us from the rip-roaring music of Elmer Bernstein from The Great Escape to his jazz-soaked score of Sweet Smell of Success. 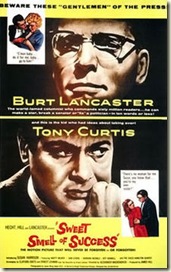 Using Elmer Bernstein as the link is a bit of a cheat, because he has according to imdb, 240 credits as a composer, and so I could have gone anywhere with him.

Sweet Smell of Success had a long gestation. It was originally a novella by screen writer to be Ernest Lehmann. Lehmann (who I used as the link from North by Northwest to West Side Story) is possibly the greatest screenwriter in the history of Hollywood (didn’t win an Oscar of course) wrote the screenplay, but had to pull out due to illness and the duties were given to dramatist Clifford Odets.

Odets in the 1930s helped found Group Theatre a theatre collective that practised the art of “method acting” (though it wasn’t called that, then). Odets as the main playwright of the group wrote such plays as Awake and Sing! Waiting for Lefty and Goldenboy. His style involved an almost overwrought language of the street, and his politics were decidedly left wing.

He testified before the House Committee on UnAmerican Activities (HUAC) and named names – though only those who had already been named. He thus was not blacklisted, but reportedly he suffered great guilt from his testimony.

He was parodied in the 1989 Coen Brothers film Barton Fink.

He also went through Lehmann’s working script, tore it down, rebuilt it and created one of the great screenplays in American film.

The story involved press agent Sidney Falco (Tony Curtis) who does all he can to worm his way in to the life (and thus pages) of newspaper columnist J. J. Hunsecker (Burt Lancaster, modelled on Walter Winchell). Hunsecker uses Falco to do his dirty work – including getting rid of Steve, the jazz musician boyfriend of Hunsecker’s sister, because Hunsecker doesn't like him (and also because he pretty well doesn’t want anyone to have his sister). Falco tries to twist Hunsecker into saving Steve’s career, but it all goes wrong, as could only occur in this tale of New York at its most seedy and gin soaked. 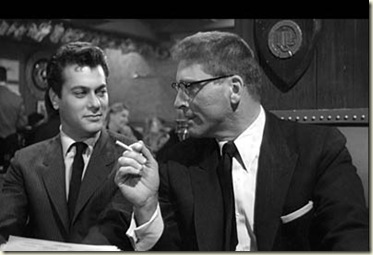 The influence Odets’s testimony before the HUAC also hangs over the plot which involves the naming of names in Hunsecker’s column, framing Steve for things he didn’t do – including being a communist. It is political without actually being so.

The film also crackles with amazing dialogue that you figure stars of today would kill for:

Truth be known, stars back then killed for it. Tony Curtis’s biggest roles to date had been playing Houdini in “Houdini” and Tino Orsini in “Trapeze” – next to Burt Lancaster. Lancaster, who had been nominated for an Oscar in From Here to Eternity was able to claim status as a “serious actor”, but Curtis was a matinee idol, and desperate to get a meaty role. The studio didn’t want him to have it – figuring it’d hurt his fan-base of teenage girls. In the end he got it, and it was a good thing too. Despite being mostly known for his lightweight roles, this one was right in the wheelhouse for the New York raised Bernard Schwartz, and this, along with his role in Some Like it Hot, is his best work.

Lancaster also does great work – the venom that he spits at Falco is potent – the way he says “match me Sidney” that makes no secret he views Falco as little more than a thing to be used and abused according to his whim. Lancaster had an odd career: lots of dross, but a handful of top drawer films – this is one of his best.

Bernstein gives the film a great jazz-based score that creates an indelible 1950s flavour. It is one of those films which would also be a crime to see colourised – it’s a black and white town, where the smoke drifts around the nightclubs and each line is delivered with a cruel bitterness drowned in gin.

It’s not a feel-good film. It sits nicely with another great work of the era The Hustler that tells of the lives of people lived mostly at night.

At the time, like many great films, it was ignored mostly by the critics and the audience. The winner of Best Picture that year was Bridge on the River Kwai and while I love that film, this at the very least should have been nominated. Odets as well should have been nominated. That year however the Best Screenwriting Oscar went to Pierre Boulle despite not writing the screenplay of The Bridge on the River Kwai. Boulle wrote the novel on which that film was based – the two writers who did write the screenplay were Carl Foreman and Michael Wilson – both of whom had been blacklisted by the HUAC.

What a great flick!

And you have some great links you can use. Can't wait to see your next review. :)