Flick of the Week: “How can I force you, Your Grace? I am a woman”.

This week’s Flick of the Week takes us with Geoffrey Rush from his role as Captain Barbossa in Pirates of the Caribbean to his work as Sir Francis Walsingham in Elizabeth. 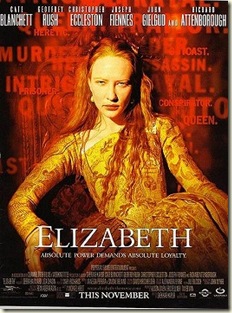 We here in Australia get rather excited when there is talk of a foreign actor portraying one of our heroes or villains. Mick Jagger’s role as Ned Kelly back in 1970 still gets a mention in shuddering terms (though that might be mostly because Mick Jagger obviously was not put on this planet to act). But spare a thought for the English. They have a movie about their greatest Queen, and an Aussie plays her. Not only that another Aussie plays her advisor Walsingham. And not only that, they both do the job so well they get them back for a sequel. Think also of poor old Robin Hood – twice now played by Aussies – and in the latest incarnation the same bloody actress who saw fit to usurp the throne with her portrayal of Queen Bess also played Maid Marion!

The problem of course for the Brits is their heritage is so damn long it’s hard for them to keep hold of it. They could hardly say that because they are based on English plays no foreigner should play the lead in a Shakespeare film .

At least they can ask that they get the accents rights.

I have written about this film before – as part of my “Oscar is always wrong” series, but that was back in July 2009, so bugger it, let me write of this now (it helps me get to the flick of the week I want to get to next).

When writing of Elizabeth, first one must always acknowledge the travesty of the Oscars. Look, I love Shakespeare in Love – it is a joy that I have no real problems with having won Best Picture – especially as it beat the ponderous pro-America Saving Private Ryan. But Cate Blanchett losing to Gwyneth Paltrow is one of the worst crimes of Oscar history. It’s up there with  Denzel Washington’s Malcolm X losing to Al Pacino’s work in Scent of a Woman or Singin’ in the Rain losing to The Greatest Show on Earth (actually it didn’t lose to it – it wasn't even nominated!) 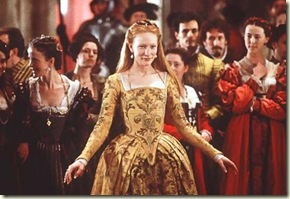 A lot of ink has been spilt on how good is Blanchett’s performance but it probably only needs to be said that she pretty much has killed the role for any other actress for a good generation or two. Taking on the role now in any film or TV series is a guaranteed way to have yourself referred to in sentences as “she’s good but she’s no Cate Blanchett”. She takes Elizabeth from a free spirited girl to a monarch; and not just any monarch but the most steely hearted female monarch that ever was. And she does it believably and tragically, bit by bit you see her character change, and struggling against the changes as well.

The film itself is one I don’t altogether love. I do love watching Blanchett and Rush put on an acting class. I don’t mind Joseph Fiennes playing Shakespeare Robert Dudley (watch this and Shakespeare in Love back to back and see if you can tell Fiennes’s portrayals apart), but the fact that this is a history with so little reference to facts I find rather ruinous to my enjoyment.

The treatment of Elizabeth’s story is so distant from reality that it is pretty much “based on the life of” rather than a retelling. Imdb.com describes the multitude of historical inaccuracies as “Details of some historical characters and events have been changed to fit the dramatic narrative”. Well yes, that is nice. So changed have they been it would be as if someone were to write a screenplay on the life of JFK where he was assassinated on the orders of Marilyn Monroe and Bobby Kennedy.

The film’s narrative arc revolves around Elizabeth and Dudley’s relationship and his eventual treasonous act of converting to Catholicism and supporting the Duke of Norfolk in his attempt to overthrow Elizabeth. Very tragic it is – and Fiennes does nicely explaining why he did so:

Lord Robert: Madame, is it not plain enough to you? It is no easy thing to be loved by the Queen.

The only problem is that it is all complete tosh. As we find in Wikipedia:

Meh – small details. I guess this is the type of film Tony Abbott would write if he were to write it “in  the heat of discussion”. 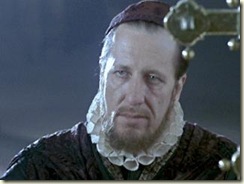 It’s why I haven’t bothered to watch the sequel – Elizabeth: The Golden Age. I was pretty ignorant of Elizabeth’s early years, but I know enough about the period in which the sequel is set to wish to avoid more “dramatic licenses”.

I’m not a pedant about such things – heck I know most representations of history are compressed for dramatic license. I know an American character will be in a film for no reason other than it will help sell the film to American audiences. But surely there was enough drama in Elizabeth’s life to not have to make stuff up. Or maybe I’m just a crotchety old sourpuss who can’t enjoy a bit of fun. (Actually I am more a film hypocrite as you’ll see with the next Flick of the Week!)

1998 was an interesting year to have this and Shakespeare in Love out at the same time – both featuring Joseph Fiennes, Geoffrey Rush and the character of Elizabeth.

What the two films also have in common is the subsequent careers of their respective directors. Since this film Shekhar Kapur has done:

That ain’t exactly an overflowing of brilliance (or quantity). The director of Shakespeare in Love,  John Madden, has similarly gone on to, umm well on to this:

Yep, I haven’t bothered with them either (I watched about half of Captain Corelli one night on TV).

But let’s not be churlish, not everyone is Spielberg or Weir (two other directors nominated for Best Director that year), and if you don’t mind a bit of historical laxness, this film is a thoroughly good couple of hours entertainment – especially as you are in the presence of acting genius.

This scene also shows Rush and Blanchett together in performances that are as good as you can get. Rush wasn’t even nominated for Best Supporting Actor, he was for his Shakespeare in Love role – a much more hammy performance – he should have been nominated for both, and won for this. James Coburn in Affliction? Oh geez. i only recently saw the second one. Decided it was a fine way to pass a quiet afternoon. I didn't regret it as such but I think it didn't have the magic of the first one, which, even with its inacuracies is, as you say, still a bloody good film.

But I never thought about it from the UK perspective - all those Colonials over running such an English story. Too funny, really. Well, for us.

So with you on the Oscars thing. Cate was robbed and Gwyneth cried in that hideous pink puff ball of a dress. A great shame.

This history in movies vs history is a regular around our place. We get most miffed at, for example, the whole Gladiator thing: why make up people & their actions when Roman history is actually quite noted for having just a few exciting moments of its own. That Rome series was doing it too - add a whole bunch of made up folk & let them take up time & soap opera stuff when the Republic is ending before our eyes. Best reading -Rubicon by Tom Holland - shows this period as the edge-of-your-seat stuff it was.

I liked James Coburn in Affliction - I thought Paul Schader got the feel of the Russell Banks novel (one of the best living US realist writers - Sweet Hereafter, Cloudsplitter) pretty spot on.

Feel a bit sorry for Mick Jagger, but he wasn't bad in the minor role of Luther "The Man from Elysium Fields" which has to be one of the most underrated films of the last ten years. Coburn was also in this - as the cuckolded novelist physically on his last legs. I've watched the film about four or five times, and I'm surprised it hasn't developed much of a critical reputation.

Maybe it's Andy Garcia, which puts people off, but the script is full of gems about the writing process (down to the procastinating author playing PC Solitaire waiting for the next idea to spring onto the page)

Blanchette was fantastic as Hedda Gabler, she's always able to pull of that steely determination.