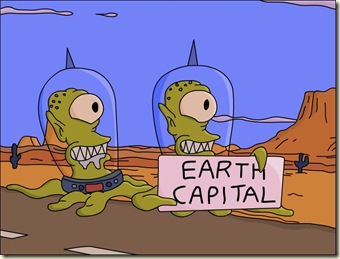 And so it has been called, which we all knew because it was leaked yesterday that it would be called today.

And it is for 21 August, which we all knew because it was leaked yesterday that it would be 21 August.

Hmm… ok now to what issues that will determine the result of the election. Firstly Julia Gillard stepped up to deliver her address:

It makes no difference which one of us you vote for. Either way,your planet is doomed. DOOMED!

Oh ok, maybe that was Kang and Kudos in The Simpsons, but pretty much it was on the money (especially Julia’s “moving forward”).

This election, I believe, presents Australians with a very clear choice: this election is about the choice as to whether we move Australia forward or go back.

Our great nation, our very great nation, has been built by generations of men and women who had the courage to move forward. Moving forward, of course, requires conviction, it requires confidence, it requires a willingness to embrace new ways of thinking, accept new challenges, to listen and to learn and to embrace new solutions. Moving forward with confidence also requires a strong set of convictions and a clear set of values.

All of my adult life I have been driven by a very clear set of values and over the last few weeks I’ve had the opportunity to share those values with the nation. I believe in hard work, I believe in the benefits and dignity of work, I believe in what comes as an individual when you do your best and you earn your keep. I believe fundamentally in the importance of respect and valuing other people, something that can be shown from simple courtesy to making sure that we give each other a helping hand in times of need and times of distress. 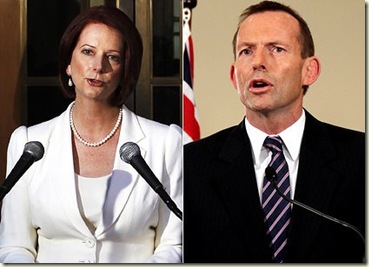 There’s not much point analysing the words – they’re focus group dross. Such speeches always are. We may mock them, but so long as people who rarely watch or care about politics have got drilled into their brain “Gillard-moving forward”, then the job is done.

Over with Tony Abbott we had much the same shtick as usual:

There is a better way. We’ll stand up for real action.

A Coalition government will respect the taxpayers’ dollar. We know that households and businesses have had to tighten their belts. We’ll make government tighten its belt too.

A government which is borrowing $100 million every single day is taking away $100 million that would otherwise be available to small business and that’s hurting every family’s budget.

We will respect people’s judgment too. The government trusts parents enough to help them buy school uniforms but not enough to let them decide the classrooms or halls or canteens that their schools need. We’ll give local communities a real say over the schools and hospitals that they so rely on.

You heard it here first – if you know how to buy your kids school uniform then you’re qualified to decide on your school building a million dollar hall.

As for the rest it’s really too easy to slap away – tight Government spending? A Minister from the Howard Government actually has the gall to say that? Borrowing $100m a day? Gee Tony, how much are they getting in interest as well – or do you only think of gross debt and not net? And how exactly would that money be given to small business?

But oh well, it’s all focus group dross. The job of journalists is to try and get the politicians away from such things, and here’s hoping they succeed.

Prior to the announcement Tony came out with some policy (or non-policy as it were):

An incoming Coalition government will not seek to change the Fair Work Act for the three years of the next term of parliament.

The Coalition will carefully monitor how the Fair Work legislation operates over the next three years, in consultation with workplace organisations and with the public.

If any changes are needed, we will seek a mandate for them at the 2013 election.

And odd policy – obviously poll driven because the Libs know Workchoices is poison for them – worse than is asylum seekers for the ALP, because at the end of the day most of the voters work; they don’t live next to boat people.

But why put any changes off for three years? I thought Abbott believed the ALP’s IR policy was bad for the economy. Here’s Abbott back on 10 February this year in Parliament house:

We thought Work Choices was crook but what has replaced it … takes us several steps backwards.

So now Abbott’s policy is to stick with something he believes is taking the economy backwards?

Here he is on 8 February this year:

We heard a lot of posturing from the Minister for Health and Ageing and from the Prime Minister today about the alleged wrongs of the former government. Who are just about the hardest working people and most decent and honourable people in our community but nurses, particularly nurses in aged care, and those aged care nurses are going to be up to $300 a week worse off as a result of this government’s changes. It is a flagrant breach of the government’s promise. Members opposite like to talk about Work Choices. The nurses union says that the government’s scheme is worse than Work Choices, and it is. We would never have ripped $300 a week out of the wages of the good, honest working people of this country.

So now Abbott’s policy is to stick with something he believes makes nurses $300 a week worse off?

Here he is in Parliament on 13 August 2009 debating the transition to the Fair Work Act Bill:

Let me begin my contribution to this debate by reminding members that workplace reform was one of the greatest achievements of the Howard government. Workplace relations reform in part contributed to the golden age of posterity which this country enjoyed from the middle 1990s until quite recently. In particular, workplace relations reform helped to achieve the marvellous outcomes of more than two million new jobs, a 20 per cent increase in real wages and—this is very important—a reduction in industrial disputation to the lowest level since records were first kept back in 1913.
…
Members opposite in the course of this debate have alluded to the former government’s Work Choices industrial legislation. Work Choices did not cost the former government the election; it was the temporary abolition of the no disadvantage test which, more than anything else, cost the former government the election—and Work Choices was far more than just that.
…
My problem with this legislation is not that the government have capitulated to the shop assistants union or that they have capitulated to the Australian Workers Union. They have not even capitulated to the forestry division of the CFMEU. But they have capitulated to the construction division of the CFMEU, the most militant, the most lawless and the most violent union in this country. In essence, this is Kevin Reynolds’s bill. That is what this bill is. It is payback for Kevin Reynolds.

And yes the same could be said about Julia Gillard and the ETS – because in both cases the politicians have made a poor argument. At least Julia can claim an ETS will require time for businesses to adjust. But Abbott really believes IR will help the economy and will help individual businesses now. So his policy is not to do something for three years that he thinks will help them now? What do you really believe in, Tony Abbott? Why wait for three years?

And so Tony Abbott’s first act of the election is to show he is not a straight talker and that he is not someone who does what he believes is right, regardless of the political consequences. That is, he is not someone who can make the tough decisions. And with that goes all of his argument against the ALP on climate change.

Enjoy the next 5 weeks; just don’t expect logic and political fortitude to play a big role.

Did you miss Erica effectively negating Abbott's assurances by saying that they would "tweak" the current IR legislation? Or wasn't he supposed to let the cat out of the bag?

I particularly enjoyed the irony in Tony Abbott arguing that the election campagin "wasn't about empty slogans".

Does this mean that he will abstain from employing the "great big new tax" slogan that he single handedly popularised?

I'm over the campaign already; it's all those journalists endlessly saying the same things and working sooo hard to get Tones across the line. anyone but Abbott.

Anon yes I was listening to Abetz try with all his might to suggest they wouldn't do anything while saying they would.

His line in that interview that he had hadn't argued against the Fair Work Bill will take some beating in the contest for the biggest load of bull to be said by a politician this campaign.