Today was Tony Abbott’s best day of the campaign thus far. Ok that’s not saying a lot, but you know – small steps. I note the caveat that I write this before he appears on Hey Hey It’s Saturday as a judge on Red Face. For that I only say for his sake I hope his office has been able to vet the acts.

Abbott appeared at Faith Lutheran College to announce his new education spending measures. He was mobbed by the primary school students which will look good on the TV news. Sure the SMH reported the reaction of a couple of the students:

"I touched him," one of the exultant students screamed. 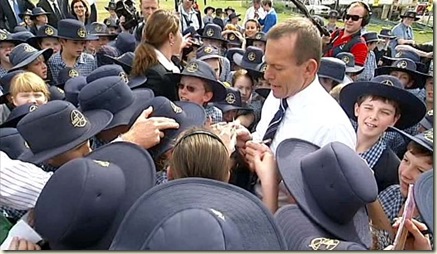 "I don't even know who he is," screamed another.

But let us not worry about those small things.

The policy he unveiled was to increase the education tax rebate and to allow it to include such things as school fees. I’ll get to the merits of the policy soon, but first it was nice to see that the policy document contained a list comparing the things covered by the ALP’s rebate and by the new Liberal Party policy:

A few very sharp journos quickly noticed that stationery was misspelt as “stationary”. Ah well these things happen. It’s not like it was a document stressing the importance of education or anything… umm err.

And I am fully aware that now having made fun of the Libs for having a spelling error in their document that I will now unavoidably make a mistake as well. I accept that and just to ensure there is won I will put it in this sentence.

A COALITION government would deliver parents up to $800 a child in tax rebates to help cover the cost of school expenses, including fees and uniforms, a move that supporters of public education say is designed to undermine state schools.

Oh wait, no that was the announcement made by John Howard in the 2007 election. Sorry. Actually Abbott’s rebate is better than Howard’s. Abbott’s is means tested – meaning only families eligible for Family Tax Benefit A can claim the rebate. Howard’s policy – utterly dumb thing that it was – was not means tested at all.

The rate at which Family Tax Benefit cuts out is below:

So you can see if you have 2 kids of school age the husband and wife must earn below a total of $107k a year to be able to access the benefit. Given average weekly earnings are around $1,290 (or around $67,000 per annum), you can see that if both parents work full time you’re probably going to over that amount. And that of course is a good thing – it is meant to be for lower income earners. The last thing we need is more bloody Howard middle-class welfare.

Here’s the list of things extra you would be able to claim (if eligible) under the Lib’s policy:

You could tell that Kerry was planning on jumping on Tony about the 'technical change' to the Fair Work Act, but then he cancelled to go on that 80's variety show.

Now Tony is going to get twice as bad when he goes on next week.

Well Joe got it pretty bad on Kerry tonight. Joe admitted their changes to the Electoral Act changed the intent of the Fair Work Act, yet he thought that was ok.

it wasn't dodgy because joe had legal advice...whatever that means

Grog, I've at long last worked out how to comment on your blog, and just wanted to say how much I appreciate what you write each day.

You are a deep well of information, some of it from long ago, as your post today shows. Your analysis is sound and based on verifiable facts, and when you express your opinions, it is clear that this is what they are.

Thank you for your continuing contribution to rational political discourse in this country.

How many kids does Pyne have? Did anyone else find his speech weird? Even my dad, who isn't the quickest on the uptake, sniggered and asked if he had 4 or 7 kids, and said maybe he's more in need of a state-funded vasectomy than music lessons. Actually, I feel sorry for him (and his neighbours). Nothing gives you homocidal tendencies like a child playing the violin, let alone 3. Maybe that explains his perpetually sour expression.

C. O'Pyne has four children. Here in SA he joins our ABC radio on a weekly basis and I can confirm that the man can talk underwater.
Thanks Grog for providing some sanity.
James

Senexx - you make some good points. But I htink the way the Libs are ging about it is all arse up.

Yep Pyne has 4 kids - he said two had "special needs". As a Dad of a girl with DS I'm interested to know what the special needs are - not for any politcal reason, just for pure interest sake (it's always interesting to hear about other people in the same/similar boat as youself).

But I do admire that he hasn't made a big thing about it in the past (though of course one of his daughters was at the announcement).

And yep TTMB, you're right - anyone can get legal advice - in fact that's what lawyers are paid to give. I'm surprised the media thinks that settles it.