Well the latest Newspoll came out today, and shock of all shock the numbers for the ALP went down from last week’s fairly unbelievable 55-45 to 52-48.

For me that’s not much of a story -  I thought the last Newspoll should have been more 53-54, and this one more like 52-53 – so bugger all movement in reality. And given a Galaxy Poll come out at 52-50 (the same as it did last week), and an Essential Media Poll came out at 55-45 (the same as last week), you’d be hard pressed to say there’s been any great shifts.

Possum over at Crikey has done an outstanding job showing the true trend of all the polls: 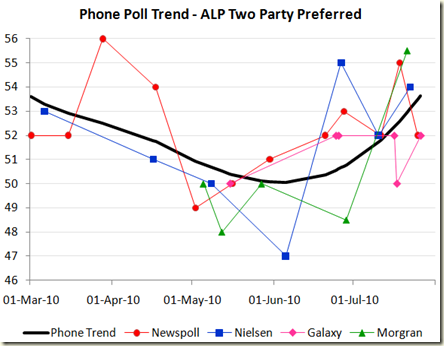 It says it all really.

The big shift to focus on for me was that of Julia’s performance. She went from a net satisfaction of 19 to one of 4. A big jump in her dissatisfaction rating. Given the poll would have been conducted straight after her mind numbingly stupid climate change policy, I think this is proof that whoever advised her to adopt the citizen’s panel should be taken out back and shot (or at least told that his or her job would from now on be to get the coffee each morning and do the photo copying).

On Preferred PM, Julia lead was also cut – from 57-27 to 50-34. Effectively halved. Not good Julia. How about you bloody well decide to lead the country??!

There was one crucial question in today’s Newspoll – who did people think would win – 65 percent said the ALP and only 17 percent said the LNP. That’s not enough. If Abbott is to win he will have to do what no opposition leader has ever been able to do.

The problem for him is that this week he has decided to make his big push for cost of living pressures to be the be all and end all.

This is based around the CPI figures due to come out on Wednesday, and interest rates next week. The problem for him is that today the Producer Prices Index came out.  It showed they had increased by only 0.3% in the June quarter – well below the expected figure of 0.8%. What does this mean? Well the March PPL figures rose by 1.0% and the CPI for that same quarter rose by 0.9% – so they are closely linked. This suggests Wednesday’s CPI figures will be below the 0.8% quarterly increase which many see as the tipping point on the RBA deciding whether or not to increase rates next week – over 0.8% and it’ll be hard for them not too, under 0.8% and I seriously doubt they would (right on 0.8% and well you got a coin toss).

The market has not taken full account of the figures yet but there was a slight shift away from the previous days’ trend:

The Libs need interest rates to go up, or their debt and deficit argument will lose a lot of weight.  If the rates stay where they are the ALP could run adverts in the last 2 weeks about low interest rates; if they go up, the Libs will be the ones running those adverts. On today’s figures that seems less likely to happen. We wait for Wednesday.

I think the ALP leading ship sailed when the rolled a PM for taking a stand against Clive Palmer.

Keep up the good work Grog.