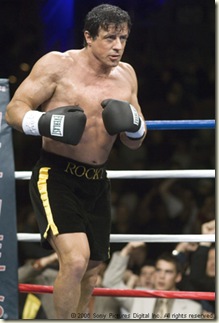 Is there anything else more fun for political tragics than Paul Keating and Bob Hawke going toe to toe like a pair of aging, punch-drunk heavyweights long past their prime but still wanting to go fifteen rounds to prove who is the dope and who is “The Greatest”?  It’s like Rocky VI, only with better acting and writing. Julia Gillard when asked about the Keating-Hawke history-biff spoke for all of us when she said she found it “entertaining” and that she “was loving it”.

Keating’s letter to Bob contesting Bob’s version of events in his new biography by Blanche d'Alpuget is just more joy for all us that we should really have seen coming the moment Blanche and Bob popped up on the 7:30 Report looking at each other’s and expressing love for each other like Jim Cairns and Junie Morosi with added botox – especially when talk came to Keating’s role in the Hawke’s Government. And then there’s the small matter of the Hawke movie this Sunday which is apparently more flattering to Bob than Paul.

You just knew PJK wasn’t going to let all that go through to the keeper – especially when Bob started suggesting Keating was a slow starter:

BOB HAWKE: I took it into account. And he had a legitimate ambition. He'd been in Parliament very, very, very, very much longer than I had been. And while he had a tentative start as Prime Minister and we all had to hold his hand, he was a quick learner and became, as we all know, a very efficient and competent Treasurer and certainly parliamentary performer. (I think Bob meant to say “tentative start as Treasurer"” – but no matter)

And so the letter. Would Paul agree with Bob’s views of things? Err that’d be a no:

The fact is, Bob, I was exceedingly kind to you for a very long time. I knew the state you were in in 1984 and notwithstanding a lot of unhelpful advice from Garnaut and other obsequious members of your staff, I carried you through the whole 1984-1987 parliament, insisting you look like the prime minister, even if your staff, the Manchu Court I called them, were otherwise prepared to leave you in your emotional hole. No other prime minister would have survived going missing for that long. But with my help, you were able to.

That yours and Blanche's rewriting of history is not only unreasonable and unfair, more than that, it is grasping. It is as if, Narcissus-like, you cannot find enough praise to heap upon yourself. In hindsight, it is obvious yours and Blanche's expressions of friendship towards me over the last few years have been completely insincere.

So no more dinners followed by port and cigars to chat about the good old days then?

Now to be honest, the letter is pretty tame for a PJK missive. Compare it to his letter to John Robertson in 2008 where he wrote:

Let me tell you, if the Labor Party's stocks ever get so low as to require your services in the parliamentary leadership, it will itself have no future.

Not a skerrick of principle or restraint have you shown. You have behaved with reckless indifference to the longevity of the current Government and to the reasonable prospects of its re-election.

It may be a novel concept for you,  let me say that the conscientious business of governance can never be founded in a soul so blackened by opportunism.

The people of New South Wales may have their problems but they would be way better rattling through than turning to someone like you in the hope of redemption.

I am ashamed to share membership of the same party as you.

Now that is telling someone where to get off.

Interestingly the Robertson letter also made mention of ALP National Secretary Karl Bitar and his role in the destabilisation of Morris Iemma. Bitar was crucial to the knifing of Rudd as Rudd pretty much in the end refused to listen to Bitar on anything (whether or not he was right to is up for conjecture). In Keating’s letter to Bob he makes this interesting point:

No other prime minister would have survived going missing for that long. But with my help, you were able to. Kevin Rudd had two months of bad polls and you were the first to say he should be replaced. And you have since repeated it.

Does this suggest Keating is in Team Rudd, rather than Team Gillard? Perhaps neither, but I do think it suggests he was not in favour of  removing Rudd so quickly. And given his reference to Bitar in the Robertson letter, it’s likely he is not a big fan of those behind it all…but I have no idea what he thinks of Paul Howes.

In the end Keating challenged Hawke because he thought Hawke was going to lead them to defeat and that he could do a better job. No doubt Julia thought the same.

Keating then leaves us with this teaser:

I can only promise you this: if I get around to writing a book, and I might, I will be telling the truth; the whole truth. And that truth will record the great structural changes that occurred during our years and my own as prime minister, but it will also record without favour, how lucky you were to have me drive the government during your down years, leaving you with the credit for much of the success.

That sound you hear is the sound of every political tragic in the nation salivating at the thought of a Keating autobiography. No doubt Melbourne University Press’s CEO, Louise Adler was on the phone first thing this morning trying to get a book deal done.

C’mon Paul, make us happy – do it (and as a special wish, get Don Watson to ghost write it).

Isn't he just the king of insults? The Today show ran a little montage of his better ones. Did you catch Graham Richardson on there this morning?

I'll still watch "Hawke", even though by it's very name its going to be skewed in favour of him.

Hey Grog - What did I do to be banned from following you on Twitter?
I'm harmless I swear! I don't comment, but I always read your blog.

I only block spam, so I must have blocked you when I did a mass blocking of things I thought were spam and you got caught up in it. I'll try an unblock you.