Today was a very interesting comparison between Julia Gillard and Tony Abbott that tells a lot about what their respective Governments would be like, and what type of campaign they’re running.

Both were in Melbourne, both made policy announcements. Both parties made policy announcements on crime, both mentioned knives. The ALP put out their policy through an announcement by Brendan O’Connor. You all know Brendan O’Connor right? Well if you’re his family and friends you do, the rest of us? Nup he’s effectively a nobody – sand that says a fair bit about how much importance the ALP is giving the issue. During campaigns many things are announced, but only the big ticket item get the leader’s stamp.

The Liberal's policy on knives and crime was announced by Tony Abbott at a press conference. Yep he gave it the full leader’s press conference treatment – it was his big announcement of the day. He went all the way to Melbourne to announce he would be cracking down on gangs. Yep gangs. I know, we’re all so worried about gangs in Australia because it feels like Australia has become a huger sunburnt South Central LA. All those schools with Crips and Bloods and with their crack and what not.

I mean geez. For a start it’s a pretty small issue in the grand scheme of things, and secondly law issues like gangs is pretty much a state issue for state police – certainly not a Prime Mininsterial issue. Sure there are concerns about crime and sure bringing in new laws for knife importation etc are all good, but if Abbott wants to be a Premier, he need only resign and tell Barry O'Farrell to bugger off. We all know what he was doing – scare the oldies about those teenagers, let them know strong Mr Abbott won’t stand for any of that even though when you really get down to it, he as PM can do next to bugger all about it.

Julia Gillard meanwhile was in Melbourne announcing a major initiative on disabilities. Now I’ll admit right off the bat that as the dad of a 4 year old girl with Down Syndrome, I’m going to be pretty well in favour of more fund for kids with disabilities, but Julia’s announcement that:

Children with a disability would be given $12,000 to help pay for early intervention treatment and also funding an extra 150 supported accommodation places for people with disabilities and $1 million to help them find work. 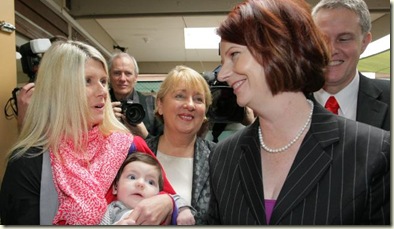 Now that’s what you want to see! Far from the disappointed and let down reaction to the metal health policy, today we had:

Anthea Green from First Voice, a coalition of organisations representing hearing impaired children and their families, told PM it was the first time the Federal Government had agreed to fund early intervention strategies.

"For us this is a very significant commitment from the Labor Party and really quite an historic commitment," she said.

"This service has been funded primarily by fundraising activities, we're trying to provide multi-disciplinary services of a professional nature like speech pathology, audiology, social work and counselling.

"So this is a very very fundamental shift in social policy, it's a great commitment and I think it's quite an historic decision."

That’s who you do it Julia!

The announcement was also made with Jenny Macklin and Bill Shorten. I have to say Shorten was excellent. His passion was just wonderful to hear. That he has spent the past two and half years cooling his heels as a Parliamentary Secretary just shows how dumb Rudd was at managing people. The guy is a gun. He can persuade people – he’s what the ALP has needed. If the ALP does win, I don’t care if the dumbass media will say it’s a factional deal, Shorten should be straight into the Cabinet.

And so there we have it: two leaders, in the same city, both announcing policies. One decides to go the shitty scare the oldies and talk about crime  and laura norder and act all tough route; the other reaches out to a small group of pretty powerless people with a positive policy that will do good.

Today was a good day to be an ALP supporter.

A couple polls came out tonight – one from Morgan had the ALP up 53-47 and a Galaxy Poll which had the result 50-50. Is it the start of a trend towards a Liberal Party win, or is it the ALP seeing the results of a bad 5 days? 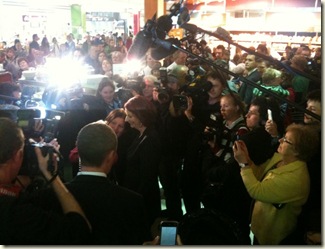 I think Gillard’s announcement on Friday of her climate change plan had the ALP hitting rock bottom – and it is no surprise that it feed through to these polls. For those who doubt the impact of her 150 citizens’ assembly idea, you only needed to watch The Chaser last night (which about 1.4 million did) at one point they asked the audience to give their views on the policy and they all shouted “It’s shit!”

Now since then of course there has been “the leaks”!!! And yeah the oldies have got on to 2GB etc to voice their concerns about Julia the communist. But they were already voting for the Libs anyway. And the past two days Julia has got her campaign back on track – today she did another meet’n’greet in the shopping centres and she was well and truly mobbed (ass this pic by journo Ben Packham shows).

Tomorrow she’s off to Perth. Sure WA may be the worst state for the ALP, but she needs to keep getting out among the people – they actually like her.

So yeah it was a bad start to the week, but it ain’t time to thinking the campaign is over. There’s a long way to go and Julia seems to have worked out what to do, and how to do it.

And which announcement headed the 7pm ABC News bulletin? Yup, you guessed it, TAbbott's Watching Brief over the Gangs of Ozzieland. The Disability Scheme announcement was added almost as an afterthought.
You sure can tell who the news editors and producers at the ABC want to win the election.
Btw, there was one downside to the announcement today wrrt disabled children by the PM. She limited it to only the most familiar syndromes. I'm a Carer of a congenitally-disabled child too, but just because my son's syndrome only occurs in 1/15,000 live births, I didn't get a guernsey in today's announcement, yet he has serious,ongoing problems which require lots of the same sorts of interventions as those that have been given the nod. Not that I am bitter and twisted about the fact, I'm happy that these kids have finally been singled out for special treatment from the government. I just wish that I had been thought of too.

Hillbilly - I did wonder about that when they listed off the disabilities. I thought there would have to be a few who miss out. Not sure why they did it that way given they would be pretty few in number.

I guess Treasury and Finance like making a finite lists...

I still think that Labour will win this election, and by a considerable margin (I'm estimating 53-47). The fact that Abbott keep pitching at the talk-back law and order crowd says to me that he's more worried about 'shoring up the base' than reaching out to the middle.

Yes a good point Aussiesmurf. I guess he's hoping the base is windening.

Good posts Grog. It's wonderful to see that sort of initiative from youngsters.
Your second post highlights the shallowness and dishonesty of this election campaign. At this point as a long time Labor voter I am hesitating about my vote for the first time. If people are so stupid as to believe that Abbott and the rest of the Big Swinging Dicks are fit to run the country, then they deserve what they'll get if he wins.
I don't have to worry about how the children or grandchildren of the current population will cope with climate change or the fact that Governments are totally run by big business.
I read somewhere that a voter had said (tongue in cheek) that they didn't know whether to vote for Rio Tinto, BHP Billiton or Exstrata. I understand exactly how they feel.
It's not the Labor Party who have blood on their hands, it's the journalists who pump out the garbage to the tune of their bosses who are selling this country down the drain.