On Twitter I came across this great project by the “Year 8 Civics students at Caroline Chisholm Catholic College in Braybrook, in Melbourne's inner-west”. It is blog called Australian Democrazy, that is “aiming to learn about politics by reporting on the 2010 Federal Election and beyond”.

It’s a cool little blog that has seen some of the students interview a journalist, and had them conduct their own class poll (pretty obvious they’re located in a safe ALP seat) (geez, imagine being the lone Family First voter in your class, poor bugger): 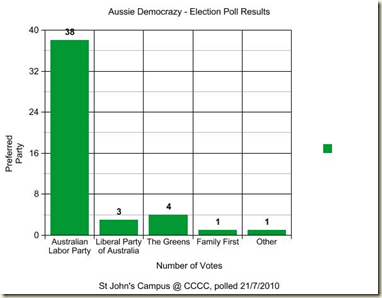 They’ve even been getting active on twitter – the students tweet questions and see if anyone who follows them on twitter can give them the answers – questions like what happens to the government when there’s an election? They also had an interview on twitter with the Greens senate candidate.

It’s a great idea that I would have been absolutely salivating over when I was in Year 8. Back then I think our lessons on the political system were all about…err actually no, now I think about it we didn't learn anything about the political system.

I only was introduced to the Australian Constitution in Year 10 when I took Legal Studies. Those who didn’t do that subject would have quite easily gone through 12 years of education without having the slightest understanding of how our political system works.

That is not a good thing.

On a totally different topic, while there have been a few good youtube adverts around (and many bad ones) this one by “thecleanersptyltd” Called Tony Abbott 50s man is a cracker, and just shows how taking things out of context can really be used against you: 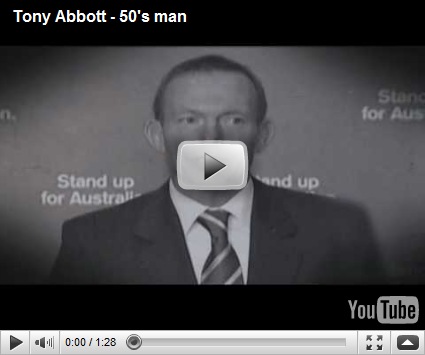