No sooner had today’s unemployment figures come out showing that unemployment was steady at 5.1% than there was talk in the media of interest rates rising. This is because all media types are grumble bums who just can’t cope giving an ALP Government any credit at all… and well, also because it is logical to link the two. The market certainly has. Here’s the table of the money market’s likelihood of an interest rate rise:

Prior to today they weren’t factoring a rise at all (in fact they were considering the chance of a fall (due to overseas rumbles and general gut-feeling that the economy is still fragile). The thing about today’s figure is not that it was 5.1%, but that the ABS also adjusted last months figure down from 5.2% to 5.1% – meaning that the employment rate has been at this point for 2 months now – ie it’s looking pretty solid.

So why the rumpus about interest rates?

Well the standard old Year 10 economics gospel is that unemployment and inflation are inversely related (as one goes down, the other goes up), and as inflation goes up so too do interest rates (to try and stop inflation going up). It’s easy to see why – more people earning money means more things being spent meaning increased demand for things, meaning the price of those things goes up. Of course that only really works if you assume a stack of things such as capacity constraints and a pretty flexible wage system. (Economists love to assume things, it make life so much easier and better for graphs – that is unless you like doing regressions with a high number of independent variables… and no, I don’t like doing that.)

But let’s have a look at the inflation and unemployment rates over the last 10 years to see how the economists are going: 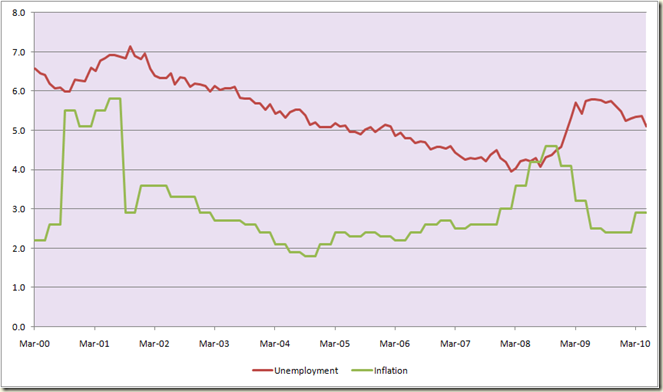 Hmmm.. yeah kinda. You can definitely see some sort of relationship in the last 2 years, but from 2002 to 2008 when unemployment went down due to the great economic work of Peter Costello and the introduction of Workchoices (that’s a joke for you late comers to the blog) inflation pretty much bumbled along around 2.5% to 3%.

I’ve also used the  underlying rate of inflation here rather than the more volatile CPI (and no I don’t know why it jumped up 3% in September 2000, and then went down in June 2001 – anyone know? UPDATE: Ghost Who Votes has pointed out it was the GST – of course! [dopey oversight that one!])

So there certainly isn’t much of a rough sense of a iron clad relationship that just because unemployment goes down inflation must go up.

A good thing to look at is the participation rate – that is the actual percentage of adults in the population who are working (as opposed to the percentage of those looking for work). 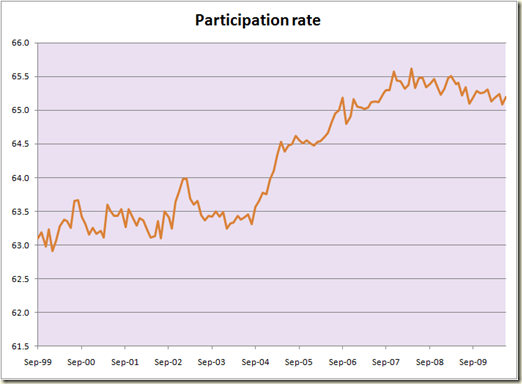 Oh well shame about that, but still you can see that the participation rate at the current level of 65.2% is pretty high – there is a bit of growth to be had, but we’d be going into record territory. But that can happen.

And just in case you think the Howard Government must have been some economic marvel, have a look at the participation level graph since 1978: 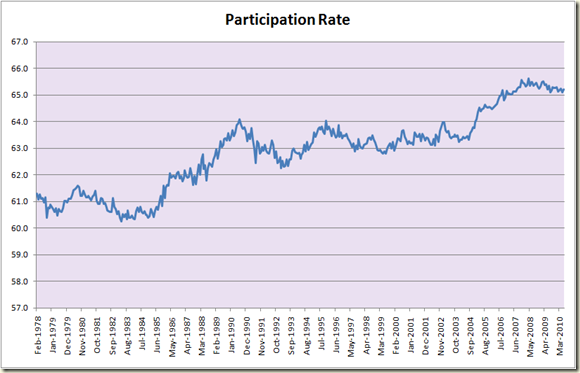 Which bring us to the comparison of participation and unemployment over the last 10 years: 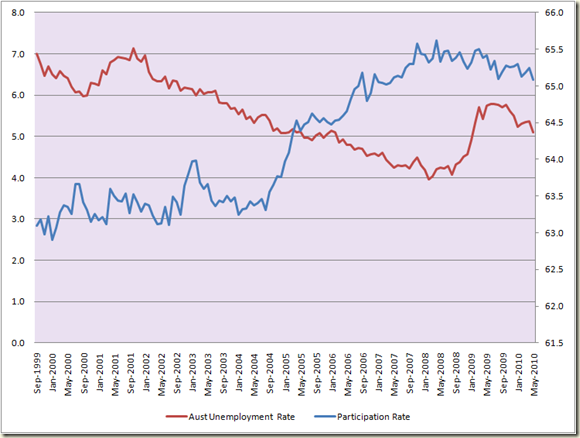 But what about the link between employment an interest rates? Again lets have a look at the last 10 years: 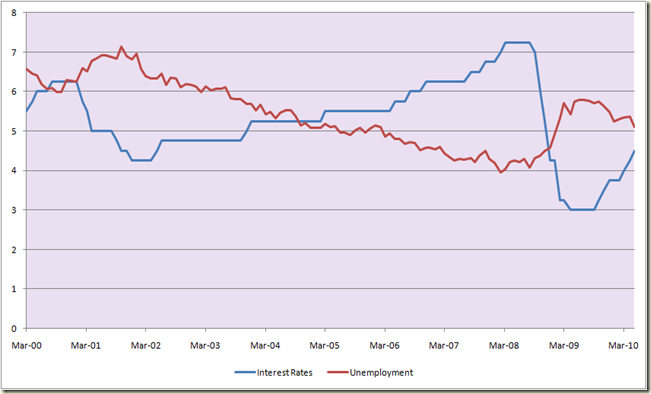 Now firstly, yes interest rates are still pretty bloody low. But secondly, much like the relationship between unemployment an inflation there is kind of a relationship, but you wouldn’t want to call it serious – more a bit of a casual one-night-stand kind of thing. If we compare inflation and interest rates however, we see true love: 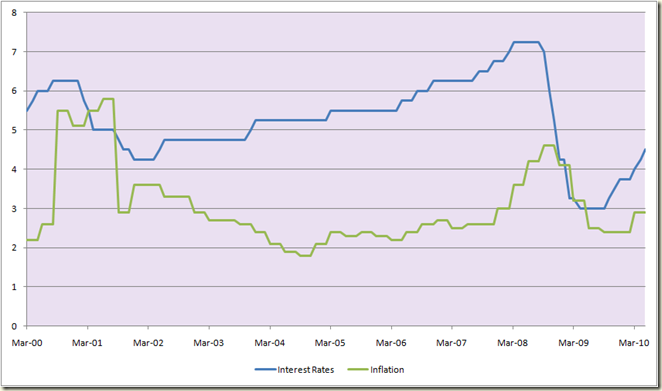 Aside from a bit of a parting in the 2003-04 (we’ll say “they were on a break” [a shout out to all you Gen X fans of Friends]), they’ve pretty well stayed together. And the answer is obvious, while the Reserve Bank does have to worry about unemployment, its main concern is inflation.

Now back in the seventies a thing came in vogue called the Misery Index. This was essentially an addition of the unemployment rate and the inflation rate – the reasoning being the higher that sum, the higher the amount of misery in the economy. Here’s the Misery Index for the last 10 years: 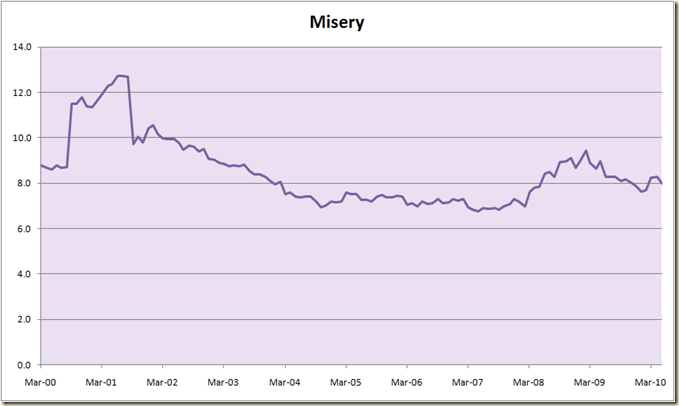 As you can see around 8% is a good average. What you can also see is that Howard was bloody lucky to win the 2001 election given the high Misery Index at the time (even accounting for the GST bump in inflation).

But how does the Misery Index run with Interest Rates? 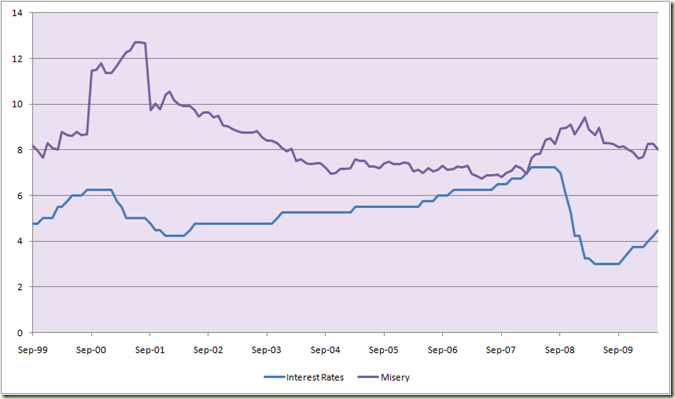 Now, were I a nerdy economist I would run the regression and see for certain, but I think you can see there is definitely a stronger relationship to this than there was when just comparing interest rates with the unemployment rate. The reasoning is obvious – there is a definite relationship between interest rates and inflation and the Misery Index contains the inflation rate. But what it does demonstrate perhaps is that the media instead of looking at the unemployment rate and crying “Interest rates to go up!!!”, they should step back and have a look at the Misery Index. It is why next months inflation figures will be important. If inflation goes up the Misery Index will go above 8% (not that that really means anything in and of itself, but it would suggest the RBA will be more likely to increase the rates that if inflation did not go up and unemployment kept going down.).

Now for some fun. Lets Have a look at unemployment since 1978: 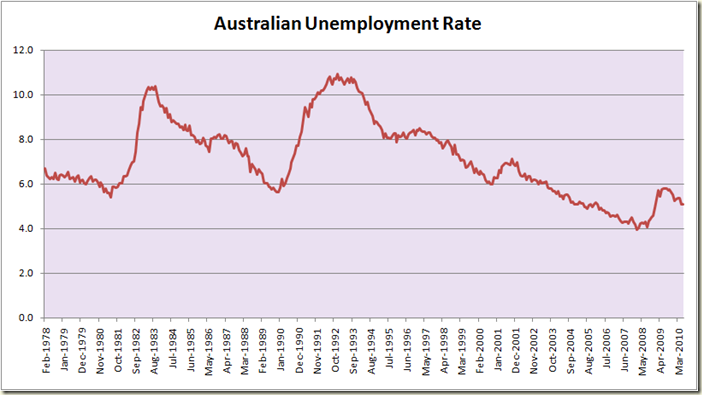 First off, yes that is the unemployment rate, not Stage 21 of the Tour de France. Secondly, yes 1993 was just the totally best time to graduate from university wasn’t it?…. Unlike a 30 year old quoted by Mathew Franklin in today’s Australian, I can truly remember how hard it was to get a job at the time.

[seriously check out this bit of great reportage:

Sheaneen Green, 30, said she had backed Mr Abbott since she was 18.
Ms Green said she had been angered by dumped prime minister Kevin Rudd's style, which she described as superficial and calculated to fool young voters. … “I remember the early 1990s and how hard it was to get a job,” she said.

Yeah it was tough in 1990 to get a job when you were 10 years old…. that’s quality journalism right there that just demands to be behind a pay wall…]

The lesson I learned from the early 90s is not that the ALP can’t manage the economy, but if you are looking like going into a recession bring the stimulus in early and bring it in hard. And if you are looking at that graph and wondering just what the hell Rudd and Co were going on about when they said it was the worst recession since WWII, have a gander at this next graph comparing the Australian and US unemployment rates since 1978… 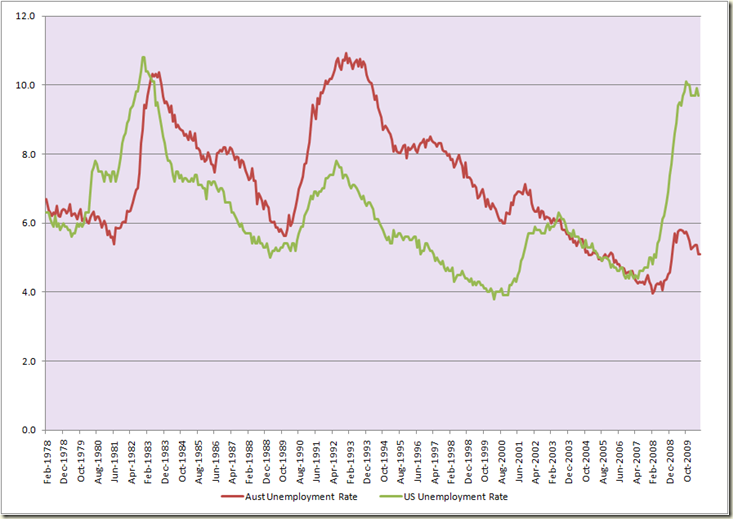 And finally some good news. Here’s the Misery Index since 1978 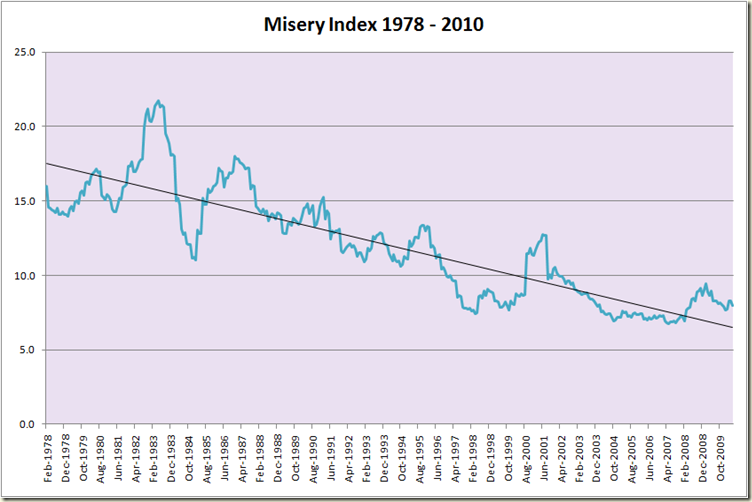 Check out that trend line!! If we assume that will continue by around 2025 we’ll have 0% unemployment and 0% inflation!

You have fucking excelled yourself this time, Grogs. Feeding in to the misery is the politics of fear.Both sides get the scaries on

In times of full employment (and yes that's what 5% is) our constant cowering keeps us all in check. Along with fear of unemployment is fear of no pay rises, of productivity links that don't link come award renegotiation.

We are just scared. And we need not be. But that requires education. That's what you are doing with each post. Thanks

"I’ve also used the underlying rate of inflation here rather than the more volatile CPI (and no I don’t know why it jumped up 3% in September 2000, and then went down in June 2001 – anyone know?)"

The GST caused a spike in the CPI due to people purchasing things that were due to become more expensive under the new tax system. Once it went into effect, that dramatic fall occurred, resulting in a quarter of negative growth for the economy.

Of course! The GST!! (smacks head). For some reason I was thinking it came in earlier, but you are quite right.

Did you see Joe Hockey's twitter post on the figures:
RBA will be very anxious about strong job creation figures and impact on inflation. Where are these jobs-retail and hospitality appear flat.
about 15 hours ago via web

So either he doesn't believe the figures or unemployment is bad because it creates inflationary pressure and may cause rates to rise. I suspect people wopuld prefer to have a job to enable them to pay their mortgage and higher bills than lower rates and bills but no money to pay . And this bloke is the alternate Treasurer - FMD.

Might also be interesting to compare the unemployment rate to inflation in the 1970s (last 10 years might seem a long time, but it may also be atypical of what we may expect in the future, particularly given huge increases in money base overseas), during which time unemployment and inflation were both at very elevated levels. Laocoon

Anon - I would love to do that, but the unemployment figures I have only go back to 1978 (I'm using the RBA chart packs).

The ABS no doubt has older figures, but I can't work out their site to find them!

It is quite clear to see that although Australia was hit particularly hard in the early 90s recession, we have done well in the late 00s recession. Elevated unemployment rates which occur during recessions are equivalent to deep cuts scarring the labour market and the economy as a whole. Our long expansion since the early 90s recession in many way is having a similar effect as annealing a piece of steel resulting in a piece free of defects and rather ductile.

A good thing to look at is the participation rate – that is the actual percentage of adults in the population who are working (as opposed to the percentage of those looking for work).

Doesn't the ABS participation rate include both the population who are working and also the unemployed people who are looking for work?

Check out that trend line!! If we assume that will continue by around 2025 we’ll have 0% unemployment and 0% inflation!

Or 5% unemployment and 5% deflation! Now that would be fun. Everything gets cheaper!

Also, is Joe Hockey really disappointed that the new jobs being created are in areas other than retail and hospitality? Surely those are two of the most worthless sectors of the economy.

Yes deflation, such a wonderful thing that! We actually did have deflaiton in the 90s In 1997 the annual inflaiton rate was -0.3% (unemployment at the time was 8.1%).

Incidentally since 1990 inflation has only ever been higher than unemployment in the last quarter of 2008. It was always higher as a rule from 1978 to 1990

Excellent trekking through the RBA data Grog, I think the misery index is under utilised by the media in this day and age.