Tonight Channel 9 breathlessly told us Laurie Oakes had a bombshell poll that would turn the election on its head. It was a Galaxy poll done on Saturday that showed the two party preferred was 50:50. This was a drop from the Galaxy poll that was in today’s News ltd papers conducted on Friday that had the ALP up 52-48. So I guess 260,000 people changed their minds in one day… or that actually nothing has really changed but Nine has to sell the poll it paid a fair bit of money for.

With a sample size of 800 for both polls the movement is not statistically significant – meaning, well meaning it was hardly a bombshell.

Today the leaders were out and about. Julia in Brisbane kissing babies 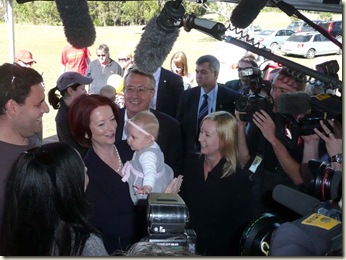 ; Tony was in western Sydney fanning the flames of fear talking about asylum  seeker boats.

Honestly, the the guy has Asylum Seeker Tourette’s (apologies to Louis Black). He was on Sky Agenda this morning, and Jennifer Hewitt from The Oz was quizzing him on population growth and infrastructure needs:

JENNIFER HEWITT: But we know that infrastructure for example takes years and years. So they’re going to say yes, you can build this infrastructure and maybe it’ll be ready in ten years time. What do you do in the meantime? Just freeze immigration numbers?

TONY ABBOTT: This is precisely the forward thinking that we haven’t had from state Labor governments. Let’s face it, Julia Gillard didn't even think that it would be good to call the Head of Government rather than the Head of State of East Timor is she wanted to build a camp there.

When it comes to the economy the Liberal Party seems to be putting all their eggs in the interest rate basket. Abbott and co go on and on about Government debt and cost of living pressures (it’s in their adverts quite prominently). But without any real cost of living pressures those charges will fall pretty flat. And so what they need is for the RBA to increase interest rates next month – which will be two and a half weeks before election day. If that does happen, the ALP will seriously have a fight on its hands.

This big indicator to look towards in the next CPI figures to come out on Wednesday 28th. If they are up, then the likelihood of an interest rate rise will also go up.

As I discussed last week, interest rates and inflation are linked because higher interest rates will depress spending, and thus reducing demand, and thus inflaiton. I also noted that unemployment and inflation were historically meant to be inversely linked (what is known as the Phillips Curve – named after a guy from NZ incidentally). 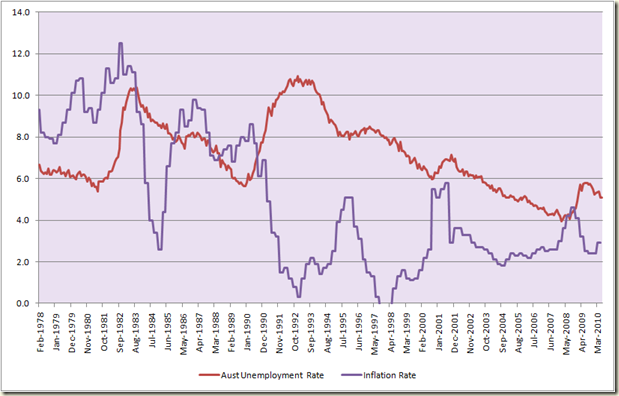 Does one go up and the other go done? Well not always. In the 1990s they kinda sorta did, but in the 2000s they didn’t. And by the way, check out the inflation line in the 1990s compared to the 1970s and 80s. When Keating said he killed inflation, he wasn't kidding! (Pity it took 17% interest rates to do it, but while that was a high cost, we have been reaping the benefits ever since).

But let’s look at the unemployment and inflation rates since November 2007: 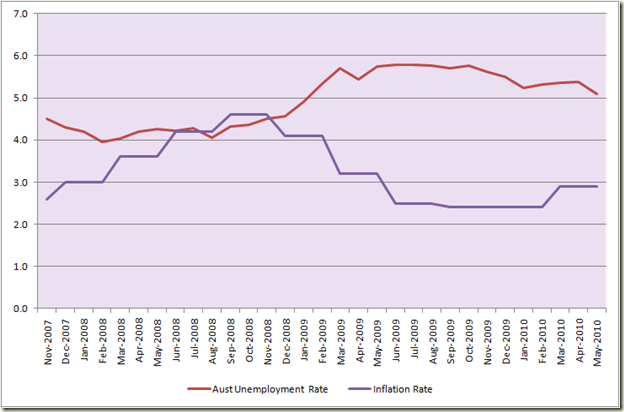 There is certainly a relationship there. This graph stops at May 2010, but we already have the June unemployment figure – 5.1%, the same as in May. This would suggest that the inflation rate should not change too much either. Julia Gillard will certainly be hoping that is the case.

Incidentally the market doesn’t think interest rates will rise next month. Here’s the latest prediction based on the interbank cash futures rate

Now sure this is before the inflation figures come out, but these rates are based on buying and selling on the futures market by people whose job it is to anticipate the change in interest rates and they factor in aspects such as likely inflation rate moves, unemployment data, job’s advertising data, consumer confidence data etc etc. Now if the inflation figure comes out in 2 weeks higher than expected these figures will change by quite a lot. But as a rule they don’t change too greatly because, as I said, it’s already factored in – that is the inflation figures would need to be a shock for this to change a lot.

So yeah there’ll be lots of bombshells and polls and blather and hubbub. But this election will be won or lost on the economy.

And the first big battle will be on July the 28th. Up til then it’s just the phony war (complete with many dud bombshells).

So journalists doing interviews are going to start calling politicians out when they ignore the questions in favour of launching into non-sequitur partisan abuse? This changes everything!

I always thought Cost of Living pressures were easier to cope with when you had a job. Harder to pay for stuff and pay the bills without a job. Don't you think the punters will be able to make that simple connection when Phoney Tony prattles on with his focus-grouped lines?
I also think that L.O. was trying to tempt Wayne Swan into a trap this morning when he kept going on about C.O.L. pressures and what was the govt. going to do about it? As in he wanted to make Swan commit to another Grocery Watch type enterprise. But Swan wasn't being fooled by the Fat Bastard(That's my new name for Oakes after the way he has behaved these last few days. That, or 'The Increasing Irrelevancy'). W.S. went on about Tax Cuts helping families cope, lol.
Anyway, Newspoll is supposed to be 55:45 guess whose way?

You're right about cost of living pressures - better to have a job than low interest rates and no job. But still an interest rate rise is never good for a Govt (especially in an eleciton). I'm not saying it will lose the eleciton for the ALP, I am more saying the Libs are banking on it happening. If it doesn't I think they are well and truly toast.