The Tour de France starts tonight. The week of racing up till now has just been one long glorious cobblestone, collision-fest of a prologue.

Sure Stage 3 over the cobblestone was tricky and sorted out a few, split the major contenders a little bit and brought to the end Frank Schleck with a collarbone broken in 2 places. But that was just a stage to survive, not to win, and it certainly was not where the Tour will be won. But let us have a peek at what the riders face today:

It will be a day for the favourites to look each other in the eye and see who is feeling good. See who has a few niggles. See who wants it the most… though it is just the start of the Tour, so let’s not read too much into it. But if there is one thing General Classification riders fear above all else, it is being left behind. The Tour is about biding your time, often spending long hours in the saddle near the head of the peloton but not at all concerned about winning the stage… and then there comes days like today, where the top guys will sort themselves out, where the team will do all they can to help, but inevitably the lesser riders will be left behind, and we’ll find out who has the right stuff.

And then once you’ve reached the summit and you find you’re still part of that inner sanctum of riders who can plausibly wear the yellow jersey down the Champs-Elysees – because there will be only around half a dozen of you now, why you can have a rest for a day – but you won’t rest, you’ll spend a good 2-3 hours of it riding anyway – and then you can get ready for Stage 9:

The official site describes the stage as thus:

A final descent that can hurt

We mortals would of course not be concerned about the hurt of the descent. We would have expired well before that point. Our heart is already screaming in pain just by looking at that yellow wedge. Our legs melt at the thought of having to somehow get a piece of machinery up that slope. Our brains freeze at the implication of having to hurl ourselves down the other side without reference to a seat belt and anti-locking breaks.

The Tour is not for us, we were ruled out of the tour the day we were born. For yes sport is about training and dedication and dedication and training, but it is also about natural selection. The tennis player is great not just because of all those balls hit over the next from the age of five, but because from the moment they were born they would be  for some unknown reason good at hitting balls over the net at the age of five – better at it than all the other kids aged five in the neighbourhood, and most likely in the next town over. The tennis tournaments are matches fought out between a select group of people who for some unknown reason were good at playing tennis before they even knew they were. What make sport so magnificent is that quite often there are many people who are very good at hitting tennis balls at the age of five. And many, many, many of them will be left behind. Those left behind may have become lawyers and doctors and engineers and teachers and they will watch knowing that they were left behind, but content, and able to marvel at the skill and talent of those who weren’t.

And yes maybe a cyclist who can climb the mountain peaks and scream down the other side without recourse to airbags could have been a marathon runner or possibly a triathlete, but they were never going to be a sprinter, they were never going to be a decathlete. They also were never going to be a doctor, or a lawyer, or an engineer, or teacher. Not because they lack the intelligence, but you only become one of those mighty riders sitting at the top of the yellow wedge pyramid if for some reason you are wired to not want to be a doctor or lawyer or engineer or teacher, but rather someone who will devote your life to being the best in the world at hauling yourself up mountains and hurling down the other side without any more than a small helmet to protect you.

And even after having done that, you still can be left behind…

…. and no. Not for this stage are there big HC peaks, but the descent of the Col du Noyer is winding and treacherous… they went down here in 2003. Here’s what happened to Joseba Beloki: 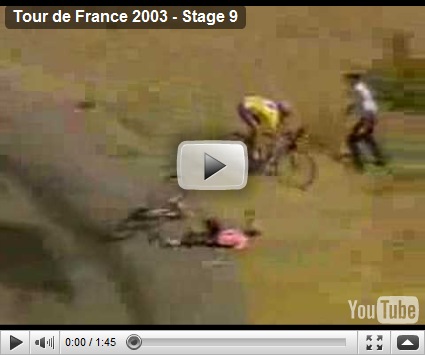 Stage 11 is for the sprinters (those who have survived that is). And then the deceptive Stage 12 gets the GC riders back so they can stare each other in the eye once more…

The final climb, while not going to great height is a short, sharp, steep brute of a climb. Just the sort of thing for the top 5 or 6 to play a friendly game of who’s going to be left behind. And those left behind will say it doesn’t matter, that there are still plenty of opportunities to get back that time (and there is) but they will lie in bed knowing that there was that moment – surely it was just a bad day, surely it can’t be reality, surely it won’t happen again – when those men in front surged and you were unable to respond, and yes they were going away from you, and you, yes you who has dedicated his life to winning this race, you who was better than the rest when you were in juniors – you who won your state championship, your national championship, you who won scholarships, who won contracts, you who were made the team leader, you were left behind when it really mattered.

And then you get to think about it all the next day, because the next day is for the sprinters and you will ride along in the peloton convincing yourself that it was just a bad day and that you still have the right stuff.

You had better be sure because Stage 14 will not allow for any pretences:

Why would anyone contemplate riding such a thing? And will the winner of the Tour be decided after this stage? Why no my friends, it will not. Yes we will be down to maybe three or maybe four riders (the rest… well, yes, they’ve been left behind, please keep your voices low, let us not shame them any more than they need be).

Those three or four will look each other in the eye and do it all again for Stage 15:

But because it is not a mountain finish this may be one for the breakaway – but you can be sure there will still be that private (but oh so public) battle between the three or four – between Contador, Schleck, Armstrong, Evans, Menchov, Sastre… (that’s six, but by this stage expect at least 2 to be just along for the shameful “we’re can’t win” ride…) . They will not worry about winning the stage, but watch them as they hurl themselves down the side of the mountain… there’s a good minute can be lost if you’re a bit tentative on the descent… and the whole Tour can be lost if you’re a bit careless.

The Tour is made up of many moments where the tour can be lost – on the cobblestones, on the sharp ascent on Stage 12, and the many long descents. To win the Tour you not only need to climb as well as anyone, you need to avoid the moments where it can all blow at the seams – you can’t win the Tour if you’re in a hospital getting your shoulder put in a sling…

And on to Stage 16. Oh Stage 16… can you believe the organisers have been criticised for this stage?

Too hard? Why of course not! They’ve been criticised for putting the hard climbs – especially the famous Col du Tourmalet – too far from the finish. Expect another day of breakways, as the three of four riders who like to think themselves the best in the world will spend the day shadow boxing and pretending that they are not feeling any pain, because they know the real day for them to get on the saddle, look each other in the eye, and see who is left behind, will be Stage 17:

Yes, this time they climb the Col du Tourmalet at the finish.

If you want to win the Tour, you better make sure you are there at the end.

And after this? After heaving yourself up mountains, and hurling yourself down the other side? After looking at the top 1 percent of the top 1 percent in the eye and ridden away from them? After making sure you are the wearer of the maillot jaune. Why you can relax, because stage 18 is for the sprinters. All you have to do is make it through the time trail of Stage 19 (sounds easy, but pray it’s not wet for you might slip on a corner – it can blow at any seam), and then the glory is yours.

And then you can sleep happy, knowing you have left the world behind.

Sport's not really my thing but I can still enjoy the lyricism of a good sports post - and I just did.

Great post, Grogs. And it's just reminded me how much I love this year's route. You really have to be the best at everything (and, of course, not fuck up) to win this one.

Beautiful writing.
And it helps explains why Le Tour is so fascinating