Elections quite often are not actually about new policies – rarely will a whiz bang new policy win you an election – in fact more often a policy (if it is dopey enough) can lose you the election. If you are hoping to win an election on the back of one policy you are stuffed. You need a suite of measures; you need a package; you need a story. 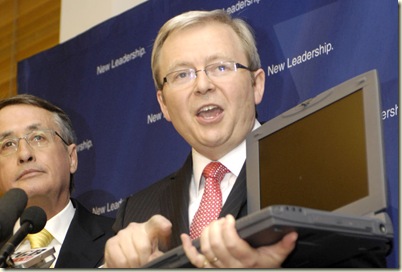 In 2007 the Liberal Party wanted people to talk about taxation because Costello had spent a good 6 months saying the ALP needed to have a taxation policy. So the first policy the Libs announced was a taxation policy. Rudd promptly copied it but crucially added in the bit about a tax rebate on buying computers for school kids, because the ALP wanted the issues to be new things – computers, broadband etc – anything to contrast with old man Howard. It worked: taxation was not talked about again, and computers in schools and broadband was a winning strategy.

Which brings us to Julia Gillard and asylum seekers and Tony Abbott and industrial relations. The first issue is poison for the ALP; the second is death for the Libs.

So what did Julia Gillard do? Well two weeks ago she took parts of the Libs’ policy (the processing offshore part) and added her twist ala Rudd and the schoolkids and computers tax rebate. She said it would be a “regional processing” involving a number of nations in the area, and that the place would have to be a signatory of the UN refugee convention (unlike Howard’s Pacific solution). Now personally I think they are two important aspects, but regardless what they do is give her something to talk about that differentiates her from the Libs (on the left), but not so much that those on the right think she is soft.

And more to the point, no one is really talking about it all that much – and if they do ask, Julia has a policy to talk about – in fact she is cheekily suggesting it is Abbott who is getting closer to her rather than the other way round!

Now let’s go to Tony Abbott and Industrial Relations. WorkChoices is killing the Libs, so what do they do? Like Rudd and Gillard they take the ALP’s policy, and then they… err whoops… they didn’t add anything! All they did is say we’ll stick with whatever the ALP has got because… err… because it’s good. Perhaps.

Err why would they do this? Weren’t the Libs against the unfair dismissal laws because they were bad for small business? Weren't they against it because school kids couldn’t work for less than 3 hours or some such? Nope – now they’re in favour of them it seems… except they will tweak the laws… a bit… just the regulations… to do something… not sure what… but you know… trust us…

Oh geez guys. If you want to “tweak” the laws then come out and be proud and say exactly what you are going to tweak and give it a twist – make the issue not about IR but about youth unemployment or some such.

But no you gave us nothing; it smelt like complete bull, and it’s been stinking up the Liberal Party joint ever since.

The allusion of course was to Mark Latham in 2004 signing a big pledge to keep interest rates low. I never thought Abbott would be that dumb. But no, he is: 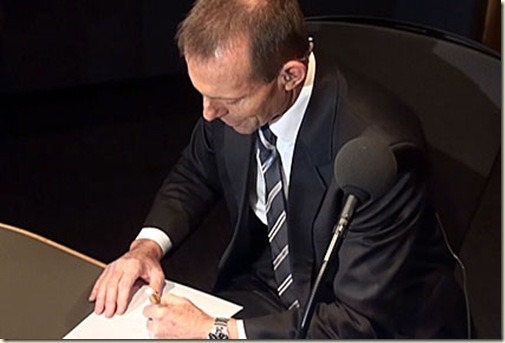 Here he is in the 3AW studio while being interviewed by Neil Mitchell signing a piece of paper saying “WorkChoices: Dead, Buried, Cremated”.

And why is this so very bad? Because no one believes him on the issue, and because by admitting your own policy is terrible and that you have nothing to replace it with, you might as well walk around holding a white flag and say “I give up”.

But even worse is to have gotten to a point where a journalist is asking you to sign a piece of paper. But this was Neil Mitchell who has obviously not forgiven Abbott for admitting on the 7:30 Report that he was not telling the truth when he was being interviewed by Mitchell on the issue of new taxes.

Today, Mitchell made him pay.

The problem of course is that in life you only need to get someone to sign anything because you don’t actually trust that person to keep his/her word. And if a politician has gotten to that point, well it’s goodnight nurse.

He could sign it in blood and it wouldn’t matter. After all no one needs Julia Gillard to sign the pledge on IR, because they trust her completely when she says she won’t being in any WorkChoices style changes. If Julia had two weeks ago signed a pledge to “turn back the boats”. Would anyone have believed her? No of course not. No one would.

And the same with Abbott here.

Abbott is also not being helped by the fact that he keeps changing exactly what he means by it being “dead, buried, cremated”. It’s not surprising he stuffs it up this is purely a poll driven issue. His explanation to Lisa Wilkinson on Channel Nine on why he was doing it: “Lisa, I’ve got an election to win!”

And here was Barnaby Joyce on PM this afternoon:

BARNABY JOYCE: Tony Abbott's given a clear commitment that he will maintain the Labor Party positions for the first term of government and that basically quarantines the issue. So any persons from the Labor Party talking about the problems of WorkChoices, it must be some form of WorkChoices that they're bringing back because we are going forward for the next three years with the consistent policy and we're doing that, quite obviously, 'cause Labor are hanging everything they possibly can on wedging us on WorkChoices.

So why have they adopted this policy? Because they believe it is the best thing for the economy? Hell no! Because it is electoral poison that’s why!

Yes, “Vote 1 Tony Abbott: I’ll say what you want to hear even though I don’t agree with it”.

Abbott in world of pain on IR. This position very hard to sustain. 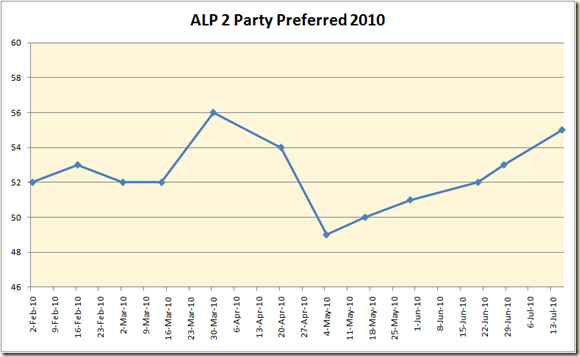 At first blush because the Galaxy polls on the weekend were 52 and 50 for the ALP there was a sense that the Newspoll was a bit of a rogue (and I do think it is a bit too high for the ALP). But look at the trend of Newspoll since the end of April (when they had the lone under 50% result for the ALP).

On that score it doesn’t look like an outlier.

The election is there for the ALP to lose and Abbott and the Libs aren’t doing much to change matters. Samantha Maiden of The Australian wrote on twitter last night:

Putting aside published polling, policies and leaders, I reckon on early evidence is ALP machine will kill the Libs on the ground

When I asked her why, she replied that the ALP was much better organised.

Today it was revealed the Liberal Party HQ won’t actually be up and running till Wednesday.

Not a good sign that things will be improving on that score anytime soon.

It probably doesn't help Abbott's cause when his own website says this:
Abbott's policy vision includes changes to the constitution to give the Commonwealth more power over the states and revisiting WorkChoices

And the Libs reckon this guy is a conviction politician!

Costello (who does not like Abbott - see his father in law's book) praised him and then mocked "Moving Forward". From yesterday's man this is ironic.

To dredge up the past (Costello) to poke fun at moving forward illustrates that the Libs have missed the very idea of moving forward.